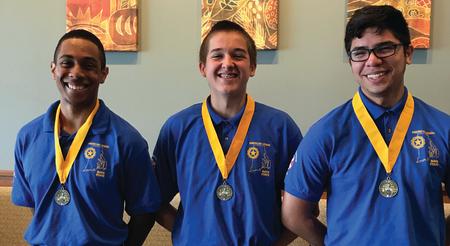 PROUD GRADUATES: Samuel Villeda, Jacob Bullard and Donovan Figueroa proudly show off their medals they received for their participation in Boys State 2017.]

Not many high school juniors would voluntarily sign up for an educational program the week school let out for summer vacation.

But, for Jacob Bullard, Donovan Figueroa and Samuel Villeda they eagerly went away from home for the week of June 18-23 to attend the Boys State program at St. Andrews School in Barrington.

The boys actually had to receive special permission from East to take their finals early in order to attend the program.

Sponsored and funded by the American Legion, they joined other boys and girls from across the state to learn about the importance and actual workings of parliamentary procedure.

There were boys and girls from all over the state, and they were public and private school students.

While all three boys happen to be JROTC cadets at East, it is not a requirement or necessity to apply to participate in the program.

“This is the ninth year that Cranston East has had students attend the program. Close to 25 students have been accepted and attended. It is for anyone looking to bolster their school resume, it is an experience that sets them apart from the crowd, “said Lt. Col. John Murray, JROTC instructor at East.

According to Ron Levasseur, Director of the American Legion Little Rhody Boys State, the application process is very concise.

“As for how we choose the boys, the criteria are as follows: an interest in the program, their academics, community service, family history of military service and future goals (i.e. West Point, military, political aspirations).

“They also need to be referred by their guidance department or history teacher(s) to the principal who certifies the student to us,” he said.

The boys and girls arrived at St. Andrews on Sunday, and immediately went to task electing officers for the week.

Donovan was elected a Senator, Jacob was the Sergeant at Arms, and Sam was elected Governor.

They learned how to write a bill, debate a bill and write and approve or reject amendments.

“We learned first-hand what it was like. We would spend nine hours arguing with each other,” said Jacob.

Each of the boys had their own ideas of what to expect, and for the most part were surprised with the experience.

“I originally thought the program was going to be more of a classroom setting with the teacher lecturing us about government, and the judicial system,” Donovan said. “But actually going through and participating in it was very different. It was something that got everyone participating, even those who were quiet. You made new bonds with the others.”

Slowly but surely, everyone grew to work with one another and feel more comfortable.

“Being with them and working with them for the full week, I felt these bonds were stronger them some with people I've known my whole life. One of the most important things I learned while there was Parliamentary Procedure as it was a way that you could hold meetings in a professional way while also letting everyone who wishes to speak without others talking over them. But one of the things I learned about myself was that I'm still in my ‘shell’ so to speak. Compared to the others who, I thought, had incredible speaking skills and would openly speak out their opinions without being scared or seeming nervous, I on the other hand was still somewhat shy and nervous and didn't want to stand out too much in case I made a fool of myself. That changed even slightly as the week progressed and it's something I will continue to work on through my senior year of high school and beyond.”

Said Jacob, “I expected the program to be mentally demanding and require a lot of pre-known knowledge. I learned the whole parliamentary procedure in just a few days, and a real understanding of how our senate actually works. I thought Boys State was a very positive and beneficial program that anyone can attend and learn from. I learned that I can adapt to new concepts fast, and implement that efficiently in a set of confined rules. I also learned that I had so many unanswered questions about our senate until Boys State that I never thought to think about or ask."

There were local government speakers throughout the week as well as the highlight of week, actually debating bills on the floor of the Rhode Island Senate at the State House.

The students were encouraged to introduce bills that would spark debates and concerned controversial topics.

“On Monday, after the election of officers, we had our first mock trial. Everyone had to propose at least one bill. Then we picked four bills to present on Thursday on the Senate floor,” said Donovan.

Sam presented one of the bills that made it through to the floor.

“I want to digitize textbooks. We could reduce the use of paper, it would be much easier to update and the program could be grant-funded by state government,” he said.

Sam gave credit to his social studies teacher at East, Chris Ougheltree, for teaching him about the law and government.

“As of 2017, this year's boys state was phenomenal. If I had to describe it in one word, it would be unity. Coming into this Boys State program I expected high levels of competition, stress, and an intense week of debating. Yet, what I received surprisingly was camaraderie between the other Boys State participants, wholehearted laughs and passionate debates. I am grateful that Ron Levasseur gave us, the Boys State members, an opportunity to lead our peers, to expand our knowledge of parliamentary procedure, and to connect with one another. I hope to see more bright and passionate young men and women in next year’s Boys and Girls State,” said Sam.

The program not only boosts a transcript, it gives the students the opportunity to apply for the prestigious American Legion and Samsung scholarships.

There is no cost to the students to participate in the program, and all meals are provided. The boys all agreed that ‘Taco Tuesday’ was the best meal.

All three boys are hoping to return next year as counselors to next wave of participants.

More information can be found at www.LittleRhodyBoysState.com.